Here’s the customer review from a VXDIAG user. 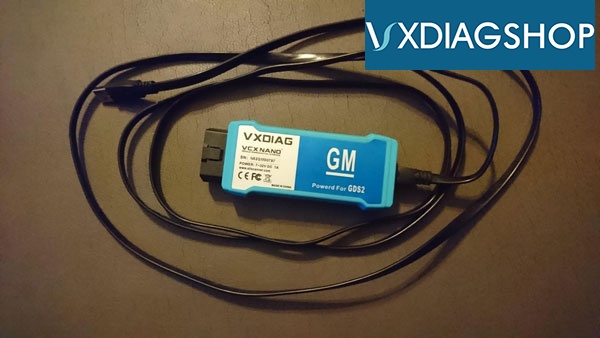 I purchased the VCX NANO to program a used GM Navigation radio. The donor radio came from a 2012 Tahoe & I was installing it in my 2013 Silverado. Since it came from a different vehicle with a different VIN, the radio displayed “LOCKED” because the VIN programmed in the donor radio did not match the VIN in the BCM of my truck. Also, the speaker options, backup camera, rear entertainment options, etc were different on my truck & the radio needed to be programmed for my truck’s specific setup. Following is a description of the device, software, & how I used it.

The device itself is a good replica of the GM Bosch MDI2 Interface & J2534 Programmer. This is the device that GM uses to interface with their modern vehicles but is backwards compatible to older vehicles. It has the ability to connect to the various modules inside the vehicle (door switch, BCM, ECM, RADIO, remote key entry, & more), read module information, reset fields, & program the module if used with an AC Delco Service & Programming Subscription (SPS).

Also included in the box is a CD with replica GM software; Tech2Win, GDS2, GM MDI Manager, & VCX Manager. The Tech2Win is an emulator for the old GM Tech2 handheld device that was in use from the mid 90’s up until about 2013. It can run standalone by itself. Global Diagnostics 2 (GDS2) replaces the Tech2 & is what dealerships use for troubleshooting today. GDS2 is a subscription service, but here it is packaged into a virtual machine that the seller has created, allowing GDS2 to run without buying a subscription from AC Delco. I don’t think the GM MDI Manager is used, but the VCX Manager has to be open for the other software to work correctly. I think it provides the interface to trick the software into working with cloned hardware. All of the software is cloned GM stuff & has been altered to allow it to run the GM MDI clone.

Not included on the CD is the ability to do any programming of new or used modules. To program, you have to get a subscription from AC Delco TDS which allows you download & flash the programming calibration files. The subscription you’re looking for is a Service & Programming Subscription (SPS). I paid $40 for 24 month access, but it only allows programming of 1 specific vehicle, and is $40 per each vehicle you wish to program. The programming is done through a Java based app, & I ended up turning off every security feature under the Java control panel to get it to run. Using the programming Java app, I was able to update the used radio to match my truck’s specific RPO codes. However, the radio was still locked since the VIN in the radio didn’t match the truck.

Here is where I got stumped for a bit. GM released a bulletin in 2008 (#PIT4007D) that basically said to use a Tech2 to invoke the built in VIN relearn command on radios that had been programmed but still had the old VIN. The only catch was that no matter what radio you were trying to reset, you had to select the options on your Tech2 for a 2006 Chevrolet Monte Carlo LTZ to invoke the relearn VIN command. I tried with the included Tech2Win software but the command was not there, it was as if it had been removed. On a hunch, I searched for an older version of Tech2Win, downloaded it, and the relearn VIN option was there! It worked, I was able to remove the old VIN allowing the radio to marry to the new VIN. The included version was NAO V33.004 but the older version that allowed for VIN reset was NAO V30.004. I suspect GM purposely removed the VIN relearn command from the updated versions of Tech2Win to force you to go to the dealer for special VCI programming that’s only available after calling the GM Techline for dealers.

SUMMARY
I have left out a lot of steps that were necessary to get the VXDIAG GM software running correctly. I would recommend you only install it on an old computer that has no personal information, considering how all of the software provided is cloned software that instructs you to disable any firewalls\antivirus. However, once you get the software installed & running correctly, it’s an excellent device for diagnostics, maintenance, & programming.